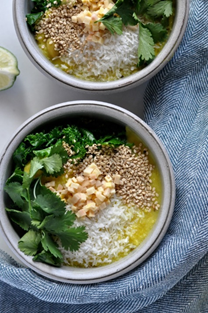 When I first discovered yoga, I found this soupy fragrant meal to be deeply nourishing, satisfying, and a little bit thrilling—that moment when your body/mind register an affirming “Yes – this is so good for me”.

As an inexpensive vegetarian and simple-to-cook protein, this staple is loved by not only yogis but by many. Dahl—which derives from the Sanskrit word dhal and means “to split”—appeals to yoga practitioners because it’s considered a nutritious part of a sattvic, or pure, diet.  It’s an ideal food for those looking to create balance in their bodies and lives—like yogis.

In India, a watery, spice-free moong dahlis usually a baby’s first food because it’s easy to digest and nutritious. Dahl is also considered tri-doshic in Ayurveda—the ancient Indian system of healing and sister science to yoga—which means it suits every dosha, or your unique physical and mental constitution that influences well-being.The low-cost, high-nutrient legume fits into the notion of balance and simplicity.

In addition to signalling a dahl’s origin, the choice of legumes also dictates nutrition and preparation – the more intact or whole the pulse, the more nutrients and the longer the cooking time. And although the word dahlmeans “to split,” some dahllegumes are cooked whole. For example, the salmon-colored, split red lentil (masoor dahl) takes about 12 minutes to surrender into an ideal porridge-like consistency, but the same lentil in its whole, brown, uncooked, un-split state can take up to 45 minutes. An essential step in preparing dahlis cooking it long enough. Look for the ‘porridge like’ consistency.There are hundreds of international and household variations on dahl. Although people throughout India use the same five or so legumes or pulses—an umbrella term for lentils, beans, and peas—the hot oil-spice blend known as the tarka varies a lot (The tarka is made by cooking ghee or hot oil with whole spices or a spice blend—masala—in a small skillet).

And to turn a simple lentil porridge into a masterpiece of flavor, focus on the tarka! Beware, however: Heat the spices too long and your delicious blend can quickly become a charred mess; too short, and the flavors won’t bloom. To avoid kitchen disasters, stick to the ingredient order listed in the recipe, and keep in mind that cooking goes quickly—the entire tarka-making process takes only two to three minutes. “Never leave that pan”. When the oil or ghee is hot, add whole spices like coriander seeds and cumin seeds; they should start to sizzle. At about 30–40 seconds on medium-high, or when the spices become reddish brown and aromatic, add the onion, ginger, and/or garlic, and then add powdered spices at the end because those tend to burn easily

On its own, dahl could surely get boring but the variations are endless.  And unlike those pure carbs, dahl offers a much more complex, nourishing nutritional profile—all of which can make dahla yogi’s dietary best friend.
Dahl is a powerhouse of nutrition that nourishes the body while empowering the senses –yogi food for the senses – I like that.

Kitchari is another amazing yogi food. Its super simple to make and so packed with goodness. It is basically a combination of dahland rice. It’s a meal that embodies a delicate simplicity of ‘less is more’ – which I appreciate. It’s made from rice and mung beans, lightly spiced with ginger, and other spices—is considered a fasting food and is used to purify digestion and cleanse systemic toxins.

Recipe
Heres one of my favourite recipes for Kitchari:
Ingredients

The dahl:
Note: split red, and small yellow beans do not require soaking
The rice:
Garnishes: